Does your child love Olaf? Here’s a fun, two-level portable sensory bin and small world that lets your child recreate what was — in our opinion — the funniest scene in FROZEN, Olaf’s dream to see what everything is like in summer. 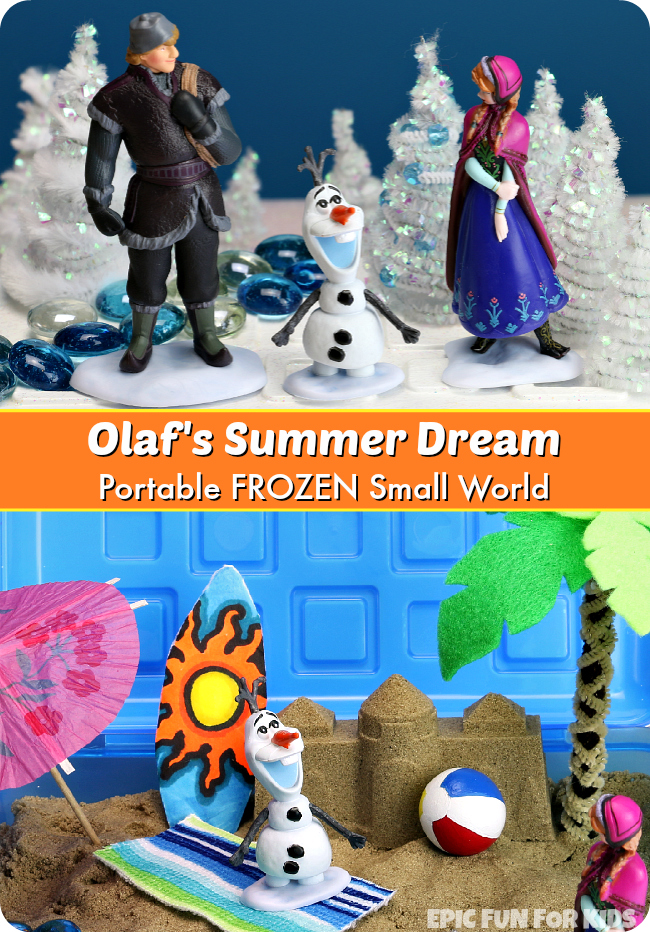 When my son saw FROZEN for the first time, he loved two scenes far and above any others: the ice cutting song at the beginning, and “In Summer”, the song that Olaf — the snowman Elsa brings to life with her magic — sings to explain how much he loves the idea of experiencing all the joys of summer.

My son came up with a way to play out the ice cutting scene with white LEGO blocks and LEGO sleds months ago, but I’ve always wanted to create an activity to play out Olaf’s summer dream. This two-level portable sensory bin and small world is what I finally came up with, and it’s so fun! 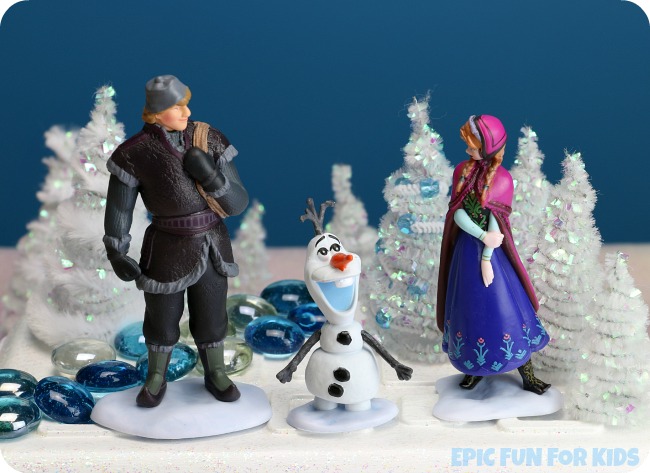 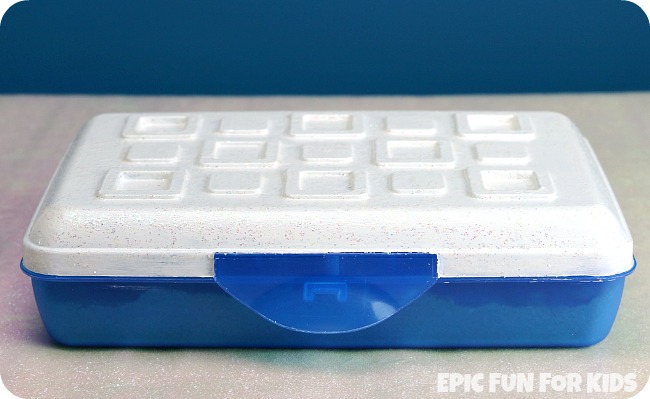 The secret to giving the bin two levels of play was painting the top of a blue pencil box (I pick these up for a dollar or two at Target) with non-toxic, white acrylic craft paint (I think I used the Ceramcoat brand). I painted four or five coats of white, followed by three coats of a non-toxic sparkle glaze.

You have to be careful for the first two or three coats not to pull up the dried paint that’s already on the box with the bristles of your paintbrush. Use a little extra paint and a light touch on the brush, and remember you can always do more coats until everything is fully covered. Sometimes it was better to dab on the paint in a tricky spot than brush it on.

I don’t have high hopes of the paint staying on the shiny plastic forever without scratching, but I have more paint to touch it up when I need to!

Painting the top of the lid also made the inside of the lid appear to be a nice sky blue when the box is opened, making the perfect summer sky for Olaf’s dream. 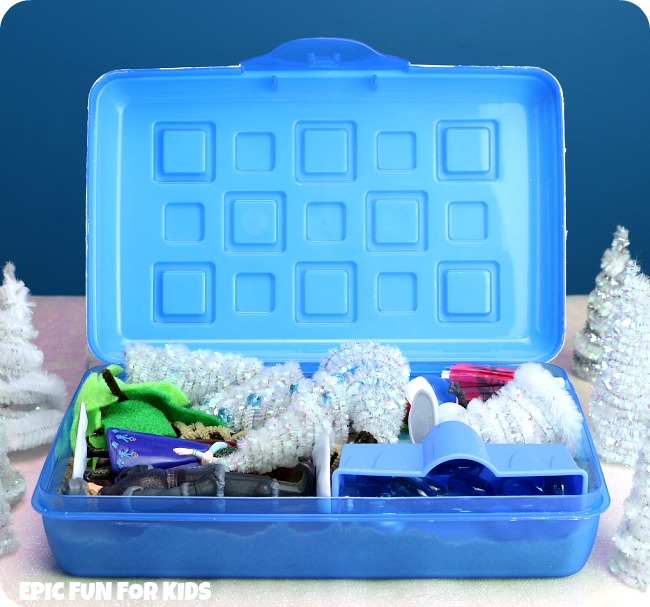 Inside the pencil box, I put: 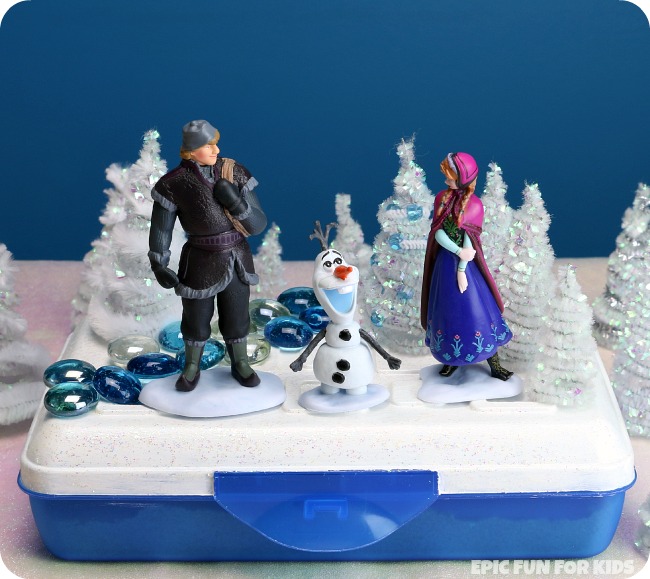 The white pipe cleaner trees and the glass gems can be used to recreate the wintery setting where Olaf sings “In Summer” to Kristoff and Anna on top of the pencil box. (I remember thinking how pretty the icy trees were in that scene, and wanted to make that part of the set!) 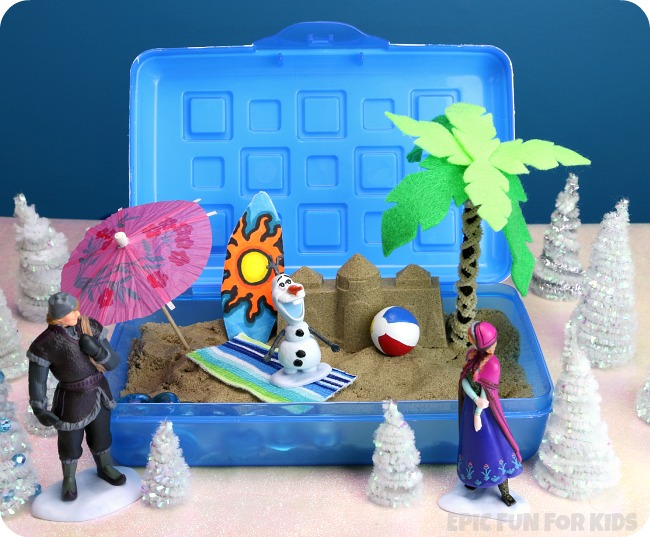 Remove the trees and gems, open the lid, and use the rest of the materials to create a beach scene. Olaf can build a sand castle, get a tan, play with the beach ball, or surf!

The gems can also be used in the summer scene, either as the first signs of Olaf melting into a puddle… 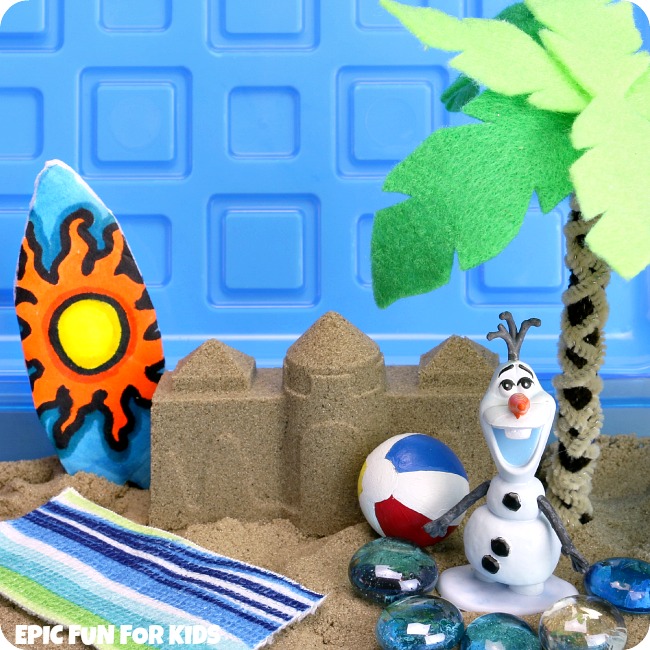 Or as water for him to go surfing on! You can slide him along on the surfboard on top of the gems, which makes it extra fun. 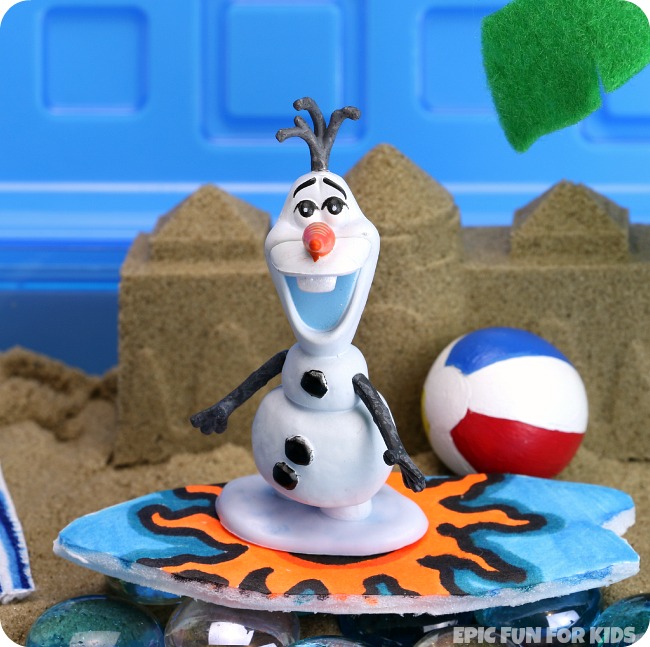 Beyond creating the scenes, there are tons of possibilities for pretend play with your child’s favorite talking snowman and his friends!

Check out our recipe for this super strong, super stretchy snow slime. It has a puffy texture that’s only lightly sticky, and it can be shaped into anything from an iceberg to a snowball to an ice rink! 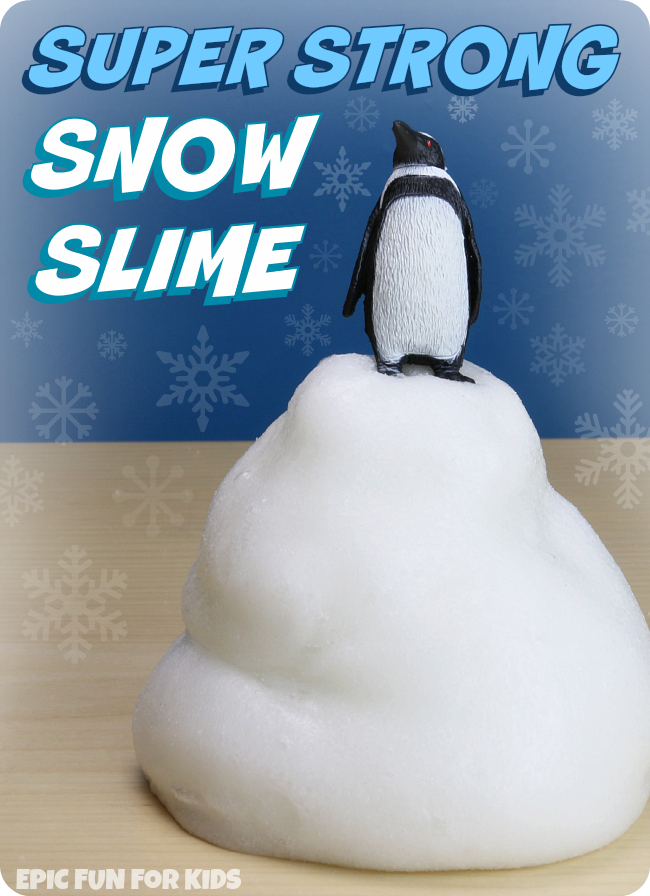